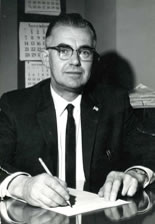 Jack H. Berryman was born in Salt Lake City, Utah, on July 28, 1921, the son of Richard and Theodora. He received his education at Westminster College in Salt Lake City (A.A.) and at the University of Utah (B.S. and M.S.). He married June Featherstone on November 6, 1982. They had a daughter, Marjorie Porter, and a son, Richard.

During World War II, he served with the Marines in the Pacific as a medic, receiving the Silver Star and Purple Heart with a cluster. Returning from the war, he began his wildlife career with the Utah Fish and Game Department (now the Division of Wildlife Resources). After three years, Jack left Utah for New Mexico, then Minnesota, both times with the U.S. Bureau of Sport Fisheries and Wildlife.

While in Minnesota, he served as president of the Minnesota Section of the Wildlife Society. In this capacity, Jack proposed that TWS begin to formulate and propose positions on fish and wildlife issues of interest to the nation. This included the formation of a Code of Ethics, which was finally adopted fifteen years later.

In 1959, Jack returned to Utah as an associate professor and wildlife specialist in the Department of Wildlife Resources in the College of Natural Resources at Utah State University, where he stayed until 1965. During this period, Jack became president of The Wildlife Society (1964-65). He returned to the Bureau of Sport Fisheries and Wildlife in 1965 as chief of the Division of Wildlife Services, which included leadership responsibility for the national program of wildlife damage management.

This was a volatile period for that agency: The Bureau of Sport Fisheries and Wildlife was reorganizing and implementing the recommendations of the 1964 “Leopold Report” on federal rodent and predator control programs. The controversy continued, resulting in the issuance of the “Cain Report” in 1972. Jack weathered both periods and in 1974 moved to the Division of Technical Assistance and then the Office of Extension Education in the reorganized U.S. Fish and Wildlife Service, where Jack served as chief until 1979.

In 1979, Jack retired from the U.S. Fish and Wildlife Service to become the executive vice-president of the International Association of Fish and Wildlife Agencies (IAFWA), a position he occupied until he retired in 1988.

Jack’s honors include the American Motors Professional Conservation Award (1976), The Distinguished Service Medal from the U.S. Department of the Interior (1979), the Seth Gordon Award from the IAFWA (1985), the Hornaday Conservation Award from the Boy Scouts of America (1989), and many others. His publications (115) emphasize resource policy, planning, use, and philosophy; extension education; concepts of outdoor recreation; and animal ecology.